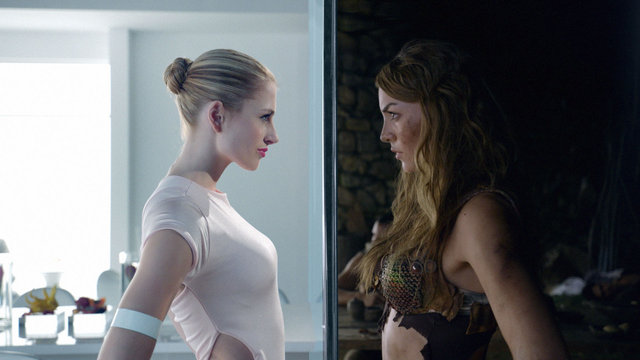 Last week, the SyFy Channel entered a Brave New World of reality television with the debut of Opposite Worlds. The premise: two groups live side-by-side, separated by glass, one in the “Stone Age” and one in the “Space Age.” From executive producer Brant Pinvidic:

[quote style=”boxed”]”Each week they’ll be competing for where they will fit in the game, battling to live on whichever side they want to be. It’s a really interesting social experiment in how your living environment affects how you play the game both socially and physically. You have to make smart social decisions: Do you stick with the team you feel a connection with, or are you more desperate to live in more comfort?”[/quote]

The premiere garnered SyFy’s highest ratings in the valuable female 18-24 demographic since 2008. The show’s twist on the Survivor-clone reality drama is cool, but what has me excited about Opposite Worlds is the show’s roots in social media.

Players are ranked in a real-time “Popularity Index” based on viewers’ tweets about them. The most popular player each week is rewarded, the least popular player is punished. (As a small aside: this premise is 100% ripped from an episode of Doctor Who — making me love it even more). Meanwhile, the “Space Age” team members have access to the internet, giving them an opportunity to influence their popularity by interacting with viewers via Twitter. Not meta enough for you yet? Each week, the audience also chooses the “Decider,” the player tasked with determining who will be eliminated. Combine that with the fact that Space Age team can communicate with the audience without the other Stone Age team’s knowledge, and you have a some insane potential.

Regardless of  Opposite Worlds’ outcome, it gives us a window into the future of broadcast media. Here the silo isn’t just broken, it is written out of existence. In Opposite Worlds, the television programming IS social media. If you will indulge a metaphor: Twitter is paint, the broadcast is canvas, and only together would we call them a complete painting. If done right, the result could be a masterpiece, and (like all masterpieces) it will be imitated. The rights to develop Opposite Worlds for Canadian television have already been sold.