Upon a Pedestal: Celebrating The Mercury Awards 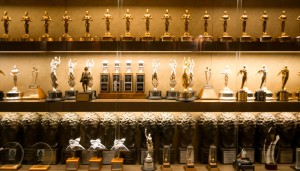 The first thing that visitors see when they walk through the doors of The Ohlmann Group is a substantial hall of awards.   Trophies, busts, plaques, and certificates collected over 64 years commemorate creative achievement and marketing successes for our clients.  And we’re proud of every one of them.

But our most prized awards are the ones that specifically recognize the healthy relationships that we forge with our clients and our peers.  Unlike the hundreds of creative advertising awards competitions, The AAF-Dayton Mercury Awards specifically honors advertising sales and support professions like ad specialists, media representatives, educators, and vendors.  It’s a competition voted upon only by our peers of AAF-Dayton. And last night, we were honored to take home some hardware.

In the first six years of the Mercury Awards program, the Best Media Buyer title belonged to our Senior Vice President Linda Kahn.   Six years. Six trophies. This year, Linda was named an Emeritus Honoree in the category and therefore became ineligible to win. But we were thrilled to see that the trophy will stay within the Ohlmann Group Media Department, taking a space on the desk of our respected Senior Media Strategist Helen Mumaw.

Linda forges closely-knit relationships with our clients and goes through great lengths to make sure that each advertising decision they make is strategically on target and financially prudent. It’s this commitment to the client that earned her the 2013 Mercury Award for Best Ad Agency Rep, edging out her fellow Ohlmann Group team members David Bowman and Jim Hausfeld. Linda was also honored to be nominated for the AAF-Dayton Unsung Hero Award.

Our Chief Marketing Strategist David Bowman, last year’s winner for Best Ad Agency Rep, enjoyed a pair of nominations this year in the categories of Best Ad Agency Rep and Educator of the Year, but it was his nomination for Best Social Media Rep that eventually merited him his 2013 Mercury Award.  We’re proud that David continues to educate both professionals and students on the latest media trends and help them stay on top of emerging technology in advertising and marketing.

The final award of the evening, Vendor of the Year, is traditionally presented to the one AAF-Dayton member who collected the most votes among all nominations among all categories. With votes cast in his favor for Best Ad Agency Rep, Best Audio/Video Production Rep, and Unsung Hero, our Creative Director Jim Hausfeld earned the coveted Vendor of the Year award – his second in the last four years.

Thanks to AAF-Dayton for putting together another memorable event that celebrates the best of our profession. And thank you to our valued clients and trusted vendors for your continued confidence in the work that we do. That alone is our greatest reward.