The future’s so bright, I gotta wear shades

Nothing like an 80s reference in the title of this blog to show my age! Yes, I am from Gen-X. If, like me, you’re a Gen X’er or Baby Boomer, how many times have you looked at the younger generation and worried about the future of this country? Back in the 60s the mantra among the youth was “don’t trust anyone over 30.” Now it seems as though the mantra among us older adults is “don’t trust anyone under 30.” A message to those of us who had to put on reading glasses to read this blog: relax. The Millennial Generation is up to the challenge.

Let’s start off with the contributions of Millennials, or Gen-Y, to date.  Of course at the top of the list is 28-year-old Facebook founder Mark Zuckerberg whose vision created the biggest internet site in history. Ben Silbermann of Pinterest, one of the latest online social media websites to hit the market, is a Millennial. Scott Gerber, founder of The Young Entrepreneur Council (YEC) and author of “Never Get a Real Job,” is under 30.  We are all proud of our Olympic heroes, Michael Phelps, Ryan Lochte, Missy Franklin, Gabby Douglas, and Middletown’s own Kayla Harrison. And speaking of London, Prince William of Great Britain is so impressive that most think he will jump past his father, Prince Charles, to be the next King of England. 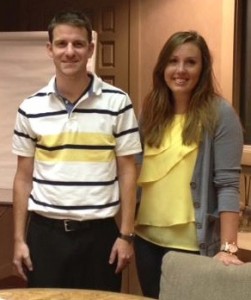 A couple other people that give me hope for the future are the interns we hosted here at The Ohlmann Group this summer.  Rob Walblay and Kate Slanker are two of the hardest working and smartest interns we have ever had the pleasure of working with.  You probably know them best from the blogs that they wrote for us over the past three months. They came into our offices on time every day and put their noses to the grindstone. Their work ethic was second-to-none and their positive, youthful energy affected us all.

Rob has recently graduated from Wright State University with a Bachelor’s degree in Communication and Media Studies and a minor in Marketing.  His heroes are Steve Jobs for being an amazing “visionary” and “futurist”, and Robert “Bob” Marley for spreading the concept of love and peace to the world through his music. The fact that the proudest moment of his lifetime is the birth of his daughter tells you everything you need to know about Rob, and much of Gen-Y. He understands the importance of family.

Kate still has a year at Ohio University.  She is studying Advertising within the doors of the ever-so-famous Scripps College, with a specialization in English.  Kate tells us that her biggest challenge in life has been overcoming the extreme shyness she’s experienced since childhood. She found her inner confidence leading her Centerville High School bowling team to win the state championship as a junior. She tells us “If you have a true faith in yourself and your ability, people feel that and put a trust in you. If you’re afraid to try, you’ll never get to where you really want to go.”

Both Rob and Kate will be missed, and I feel for their replacements; they have big shoes to fill!  However, given my new found optimism in their generation, chances are our next interns will impress, too. Fear not, Baby Boomers and Gen-Xers: our future is in good hands with the Millennials. At least the one’s I know!